At the request of Donald Insall Associates, Historic Building Consultants, we were instructed to undertake a digital archival survey of the Hayla Tower in the Liwa Oasis, Abu Dhabi, United Arab Emirates on behalf of the ultimate client ADACH ( Abu Dhabi Authority for Culture & Heritage). Liwa Oasis lies 150 km ssw of the city of Abu Dhabi in the Rub-Al-Khali Desert and is a crescent shaped Oasis consisting of 50 or so villages and a small town (Muzayri). The Oasis is of historic significance to the people of the UAE as it is the birthplace of the ruling families of Abu Dhabi and also Dubai before the ruling Al Nahyan family moved their principle residence to Abu Dhabi in 1793. The Hayla Tower lies in a small clearing of date palms to the West end of the Oasis and was believed to have been built in the 19th century during the wars between Liwa and Ajman. It is assumed that what remains today, is the surviving structure of a totally original and largely un restored watch-tower. Interestingly the small entrance that survives into the tower was probably originally set some 2 metres above ground level and it is believed that the tower originally stood significantly higher when built, with the lower portion still preserved for future investigations. The circular tower is constructed from roughly coursed rubble stone bedded in mortar and the whole structure is in such a fragile state that ADACH installed a lightweight scaffold around and also through the tower as a temporary measure pending the report to be issued by the consultants. As part of this report, the Greenhatch Group Ltd provided accurate survey drawings and photography that would be relied upon to form the basis for recommendations for the towers consolidation and repairs. 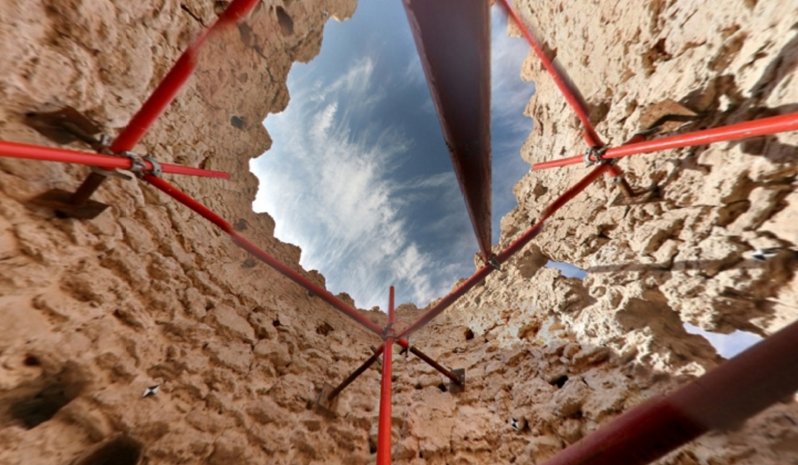 The tower and its localised surroundings were surveyed internally and externally using a phased based, Leica HDS 6000 laser scanner with point resolution per scan set at approx. 2mm within a 10m radius. Precise, tilt and turn field targets were used to provide registration, with each scan position being tied into a minimum of 4 No control points located using a dedicated Leica TCRP 1201 by coordinated REDM observations. Once each scan was finalised, 360 degree photography was then taken using a collimation calibrated Manfrotto camera bracket and Canon EOS 5D digital SLR camera, thus allowing either 360 degree panorama images to be created per setting and also colourised point cloud data. The survey was undertaken using a two man survey team combination in the Spring of 2010 and excluding travelling to and from site, was actually recorded in a single working day. The evidence of a scaffolding system on site allowed us to establish 8 No external scans at fairly uniformed positions at a 10m radius around the perimeter of the tower. The interior of the tower was scanned from the same central location at both approx. 1.0m height and also approx. 1.8m height using the same 4 No coordinated field targets to allow comprehensive coverage around the heavily braced interior. All point cloud data for the project was saved directly to the HDS 6000 scanners hard drive for the sake of efficiency and also to reduce the amount of cables and hardware required by way of a computer link up method. The data was then downloaded on to both our site lap top and an external hard drive and analysed before leaving. Back in the U.K, Leica Cyclone software was then used to import scan data and coordinated tie points to provide a complete, fully registered point cloud of the tower and its surroundings. This point cloud data was then exported into AutoCAD using Leica Cloudworx to provide appropriate plan, elevation and sectional 2D DWG drawings by selective orthogonal slicing commands. 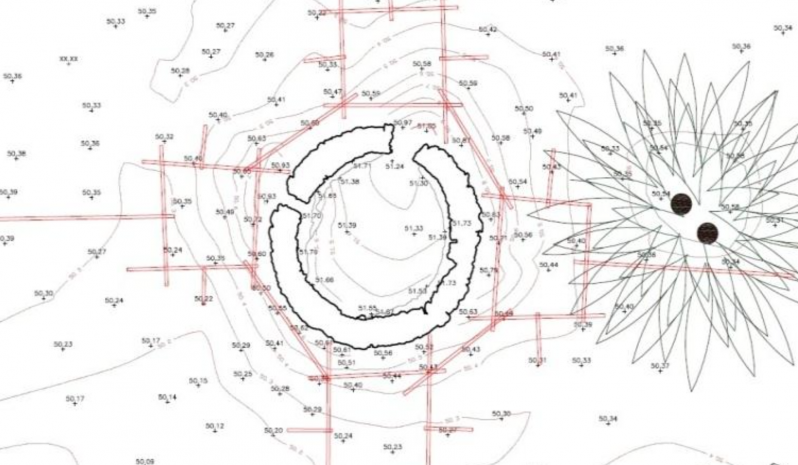 Why was scanning selected

With the circular and irregular nature of the tower, the conservation architects Donald Insall and Associates decided that the use of modern laser scanning technologies might be the best way to comprehensively record what is largely considered the most significant historic building in Liwa Oasis, due to the difficulties of portraying such a structure by the more traditional and relied upon process of photogrammetry. Due to the existence of scaffolding covering the entire structure externally and internally, the site lent itself in the favour of laser scanning as the likelihood of scaffolding obscuring end deliverables was eliminated by multiple scan cloud coverage. Internally, with such limited fields of view, difficult access and mass of scaffolding covering lines of sight, photogrammetric results would have been severely compromised, whilst the use of a centrally located 360 deg. rotating laser scanner was well suited to this challenging environment.

What problems were encountered?

The logistics of getting a laser scanner, a theodolite and all accompanying survey equipment with just two survey staff to Abu Dhabi was exceptionally stressful as guarantees that all the equipment would be with us and fully functioning after flying was difficult to predict. Once eventually in the Oasis with all the equipment checked, the difficulties of permanent survey control had to be addressed and we decided upon the use of survey disks fixed to the base of 5 palm trees, which were then locally coordinated by REDM. These could then be used to resect back to our coordinate system when so required at a later date. Next, with a lightweight scaffolding structure surrounding the tower, we needed to ensure that our scan locations would cover all other locations where scaffolding tubes obscured laser scan data. Externally we decided to use the partly regularised pattern of the scaffolding to divide the tower perimeter into eight segments. Internally the mass of scaffolding proved exceptionally difficult to work around, so again a method was devised splitting a lower and upper central coverage to ensure all data was gained. These scans still needed to be tied into control points however and with great difficulty we managed to observe 4 field targets by total station using the same lower internal tripod setting. Battery power was crucial for the survey as there was no means of charging equipment on site. Because we knew how many scans per battery we could utilise, we devised a strategy before commencing scanning which worked well until the last scan where a low power setting was used to complete the work. Temperature also had an effect during the survey, rising from around 30deg C. in the morning to 45deg C. midday. With the operating temperature of the scanner exceeded, it was only by periodically cooling the scanner down using the hire cars air conditioning that we were able to continue. The environment also played a part in the difficulties of surveying the tower, as the air was so dry and sand particles were so fine that a layer of dust coated all our equipment and instruments. The lens of the scanner and theodolite had to be regularly cleaned and if additional days on site had been required, I have no doubt that the dust may well of compromised the rotating mechanisms of both instruments.

What were the final deliverables?

With the purpose of the surveying project being to supply digital archival material for use and interpretation of the surviving structure, the brief was mainly to supply 2D AutoCAD dwg files and high resolution PDF files for insertion in a conservation strategy plan. AutoCAD 2D drawings were issued in plan form with an underlying plan and topographical survey followed by additional horizontal slices up the tower at 1 metre intervals. External elevations to the tower were issued in eight orthogonal views as were eight similarly orientated internal sectional elevations. Further to this, each external and internal elevation was backed up by the issue of partially scaled, rectified digital photography (issued within the constraints of a circular structure) for use in identifying specific areas of repair. In addition to the Standard 2D drawings issued we also provided an interactive Leica Truview DVD which provided 3 dimensional interactions with each scan position and also a hyperlink into a 360 deg. digital panorama photograph of each survey position. Finally a complete archival record of the site data was also issued in the English Heritage proprietary formats for future use, such as 3D modelling or monitoring analysis.