Laser scan information has become a vital part of the as-built surveying industry over the past decade and with the current proliferation of scanners on the market, this will become ever more the case. With regards to the production of 3D models, the requirement for the collection of good point cloud data is even more important as there is much spatial data that is unable to be collected via the use of traditional measuring techniques, whether that be reflectorless total stations, hand measuring or photogrammetry. However, as useful as the scan data may be, there may still be elements of an historic structure that it is difficult to model efficiently and accurately due to their complexity or irregularity. The integration of mesh models created from point clouds can overcome some of these problems and give a good visual representation of the required architectural elements.

In this case Greenhatch Group was asked to undertake a full measured building survey of a listed former post office in Dundee with a detailed Revit model as the final output. Built in 1898 the former post office is a category B listed grey/cream sandstone ashlar 3 story structure with many impressive bipartite and tripartite windows, with Doric mullions flanked by a Corinthian columns along with a balustraded parapet below a steeply pitched slate roof. The architects required a high level of detail with visually and spatially accurate representations of the majority of the architectural features. 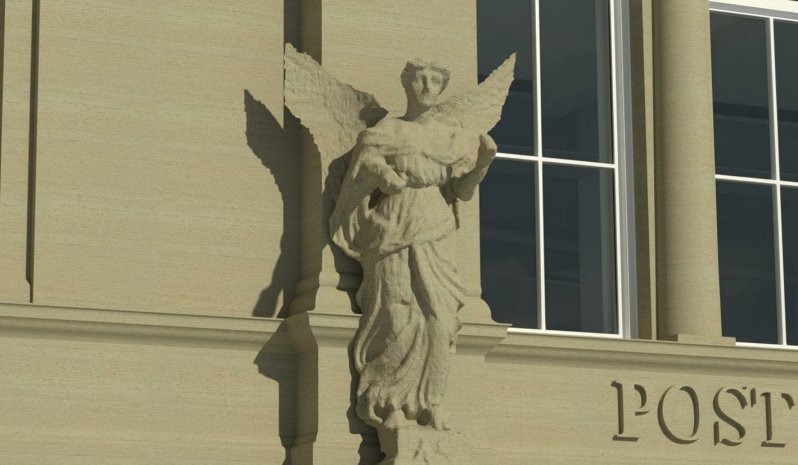 The on-site survey work was undertaken using a Leica TS15i in combination with a Zoller + Fröhlich 5010c phase based scanner alongside traditional hand sketches and measurements using tape measures and Leica Distos. All scan locations would be tied in to the control network using a minimum of 4 black and white checker board targets with the centre points coordinated by the total station. The office process was to use Leica Cyclone to register the individual scans together from which an e57 format file was exported to Autodesk Recap to produce a RCP project to enable the use of the point cloud in Revit. The site was comprehensively scanned internally and externally which, along with the hand measurements, facilitated the creation of a full LOD 350 model of the post office for use by the commissioning architects for their design work planning conversion of the building to a new campus for a nearby school.

Why was scanning selected?

We find when building up a 3D model that having point cloud data is generally invaluable, particularly on a project such as this where due to the age of the building many of the internal walls and floors do not run straight and true. In addition to this, the client had requested a high level of detail to the external architectural features to allow the production of accurate visual renders for use in planning proposals. To enable the modelling of these features we would need accurate data to use as a guide to produce the parametric families used to construct the final Revit model. The building itself is flanked by three public highways with tall buildings overlooking the site on two sides. Scanning the building worked well with the project as it meant we could carry out all external survey work, except the roof areas, within a single day, reducing the time the surveyors would have to work alongside the busy roads considerably when compared to more traditional survey methods. Another advantage to using a laser scanner for the internal survey was in that due to the condition of some floors there were parts of the building cordoned off as inaccessible. With the laser scanner we were able to set up at a safe location and remotely survey the inaccessible areas so we could still produce an accurate model for all areas, regardless of floor condition.

What problems were encountered?

Whilst the on-site survey was carried out without significant incident, there were some elements of the building that proved quite troublesome to model using the standard “out of the box” Revit tools. In particular, the principle elevation hosts two statues of winged females which would have been impossible to model natively in Revit. The client had specifically requested that these  be included in the model as they make up part if the building’s listed status.

The decision was made to incorporate a mesh created from the point cloud into a Revit family which could then be placed in the model at the correct coordinates, resulting in an object that was both geometrically correct in size and location, but would also look graphically appealing in any produced rendered views. An area of scan points for the two statues was exported from the registration and a mesh was created using Cloud Compare. This mesh was then cleaned and edited using MeshLab before reducing the number of faces so that it would have a small file size so as not to slow down the completed model. Exporting the competed mesh as a DWG file format enabled the insertion of the mesh into a Revit family and then loaded into the final model.

The first attempt at this process left a visually unappealing mesh as the edges of the triangles stood out clearly in stark contrast to the pale stone material chosen for the external model. This was greatly improved by editing the mesh using AutoDesk 3ds Max to render the edges invisible before integrating into the Revit family. The resulted in a family that looked graphically correct both in standard drafting and rendered views.

What were the final deliverables?

The final delivered output was a full 3D model of the building, carried out to a high detail level, both internally and externally. Within the issued file, we set up sheets for each floor plan including the roof level along with elevations and typical sections and rendered view ports throughout the structure. These were then exported as PDF sheets to be viewed by anyone without the required drafting software. 2D floor plans were also exported in DWG format so that the plans could be used in a more traditional AutoCAD or similar environment.