English Heritage has recently awarded the prestigious 3D laser scan contract to survey Stonehenge and its surrounding environment to the Greenhatch Group and its associated project team.

3D laser scan survey work is currently being undertaken on the site to capture the stones and the landscape surrounding them at a level of precision and definition never before attempted.

The resultant high resolution archival data and 3D meshed models are to be presented to English Heritage at the National Monuments Records Centre (NMRC) in Swindon on May 24th and further information will be released after this official handover date.

English Heritage is using a combination of modern 3D laser scanning and digital imaging technology to survey every inch of every stone that makes up Stonehenge to produce the most accurate digital model ever for the world famous prehistoric monument.

The survey includes all the visible faces of the standing and fallen stones of Stonehenge, including Station, Heel and Slaughter stones, as well as the top of the horizontal lintels which have never before been surveyed at this level of detail.

Despite the vast amount of archaeological activity and academic study into Stonehenge and its landscape over the centuries, relatively little is known about the lichen-covered surfaces of the sarsens and bluestones that make up the stone circle. The availability of high resolution laser scanners that can produce highly accurate surface models means that it is now possible to record details and irregularities on the stone surfaces down to a resolution of 0.5mm. It is also hoped that secrets hidden underneath the thick cover of lichens may be revealed in the analysis using sophisticated software.

The study serves a number of purposes. It will provide precise base-line data to monitor the physical condition of the monument which is subjected to daily weathering. Digital data of this unprecedented level of detail will also be a valuable resource to anyone who produces reconstruction models, drawings and computer generated images of the monument for public understanding and interpretation, including the English Heritage interpretation team who is working on the new displays of the proposed visitor center.

Understanding of the known Neolithic "dagger" and Bronze Age carvings as well as modern graffiti carvings might also be enhanced, and new ones might be discovered. Dave Batchelor, English Heritage's Stonehenge archaeologist, says: "The surfaces of the stones of Stonehenge hold fascinating clues to the past. They are like manuscripts, a whole palimpsest of the ideas, efforts and idiosyncrasies that marked the lives of people over millennia. I look forward very much to seeing what we are about to find."

Paul Bryan, English Heritage's Head of Geospatial Imaging who is leading on this survey with the assistance of Greenhatch Group together with Atkins Mapping and Archaeo-Environment Ltd, said: "A survey of the standing and fallen stones of Stonehenge was last undertaken in 1993 using photogrammetry. The 2cm resolution that was possible back then will be surpassed by the millimetric resolution of this new survey, which will capture a lot more information on the subtleties of the monument and its surrounding landscape."

The main equipment used is a Z+F Imager 5010 laser scanner which can rapidly record millions of 3D points for a single surface. All the data will then be digitally processed over the next two months to produce a variety of 3D models and datasets which can be manipulated and used in multifarious ways. 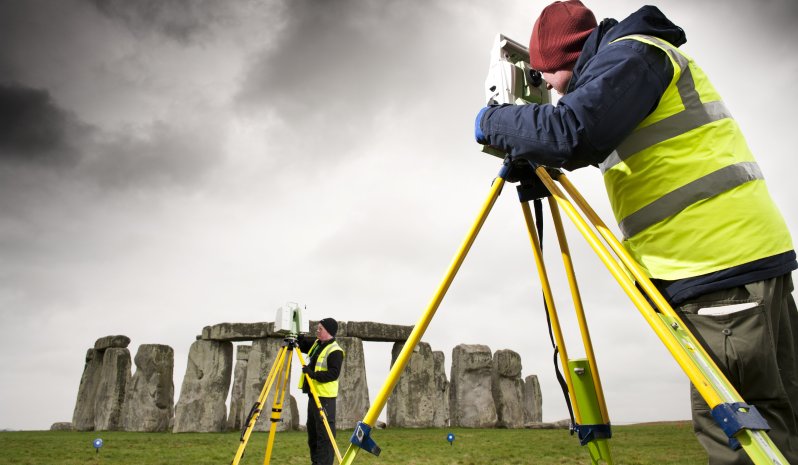